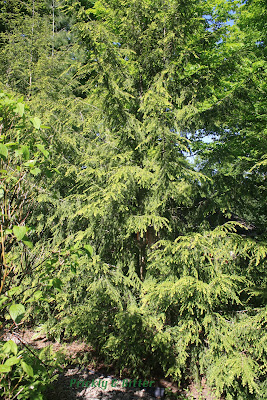 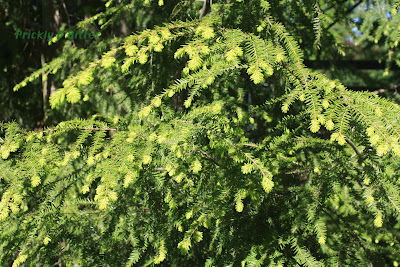 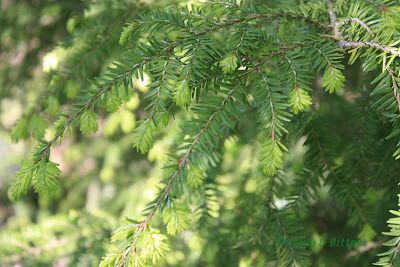 Historically, the hemlock tree was very important in the lumber industry not for house building or furniture building materials, but for railway ties. Hemlocks are very slow growing trees, so it would take hundreds of years for a tree to be big enough to cut down to make one post. Trees were felled on the east coast, their bark cut off to make a square shaped log, and they were cut into pieces and shipped off to build the railways across North America. This was an incredibly destructive process, and there are still forests in the eastern half of Canada that have never recovered from this practice (the majority of which ended in the early 1900s when there were no more large Eastern hemlocks left). My PhD supervisor and I went out to a woodlot a couple of summers ago to look for mushrooms and it was one of the few remaining old growth forests that had once been dominated by hemlocks; there are still stumps left of enormous old trees that had been felled. The good thing about leaving all these stumps behind is that some really neat fungi grow on them!

Unfortunately, the Eastern hemlock is under severe threat of population destruction by an invasive pest from Asia (that usually attacks the Asian species of hemlock which are relatively resistant to the insect). The insect is called the hemlock wooly adelgid, and when it latches onto the tree it often gives it a blueish "furry" appearance at the base of the needles. The insects drink the sap from the tree and burrow under the bark, destroying the tree's ability to transport nutrients from the roots to the growing branches, or the photosynthesizing needles to the growing roots. This causes extreme plant stress, more often than not leading to death. The only way to get rid of these adelgids once they attack the tree is to cut the branches off, and any arborist will tell you that hemlocks are especially sensitive to pruning because they are so slow growing. Pruning the ends of branches is fine, but cutting entire branches off should only be done one or two per year to ensure tree survival, not half the tree. Since there is no real treatment for these insects once the infection has started, it can essentially be taken as the kiss of death for the tree, and it should be removed from the garden immediately to prevent the spread. The other aspect of plant removal that must be taken into account is that the tree can't just be mulched or composted! It should be removed from the area and burned to kill the insects and to prevent future infection.
Posted by Jen M at 9:49 AM