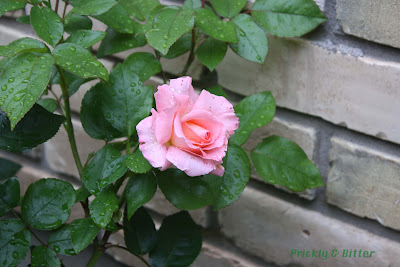 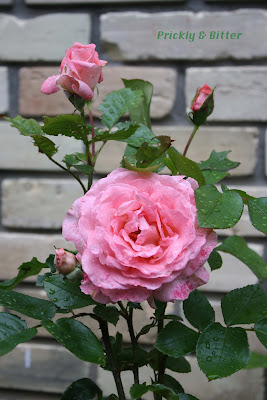 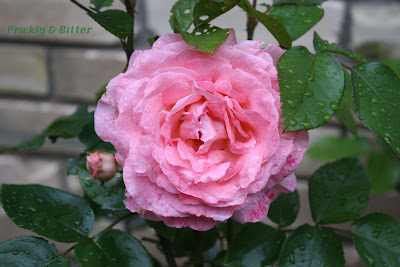 Most species in the rose family are native to Asia, although a few are native to Europe and North America. This particular hybrid is a natural hybrid of rose originating in Europe from a cross originally of Rosa moschata and Rosa gallica, then the offspring of that cross was mated with Rosa fedtschenkoana (your guess is as good as mine for how to pronounce that one!). It wasn't long after this happened naturally that humans decided this was an unusually beautiful rose hybrid, and it was propagated in gardens across Europe, eventually making their way to North America. Most garden roses would be unlikely to survive in the wild since they have so many petals. This makes it exceedingly difficult for insects to find the stamens and ovaries of the flowers, and sometimes roses have been bred to completely lack sexual organs. For this reason, roses truly are an example of a domesticated crop. Roses are the official flower of June.

In general, there are two different types of Damask roses (named after Damascus): one type that only blooms in the spring, and one type that blooms in the spring and then again in the fall if the rose blooms are "dead-headed" (meaning you pick off the flower head as the petals start to fall off). Dead-heading roses prevents the formation of fruit, which often tricks the plant into flowering again. This isn't always in the best interest of the plant, since this does produce a significant strain on the plant. Dead-heading for a few years then allowing the plant to fruit on its own and produce seeds is the best way to ensure a long life out of your rose bushes. The types of fruit that roses produce (not all, but most ornamental roses do) is called a hypanthium, or a "hyp" for short. This is where we get the term "rosehip," and if you pick the fruit when it's ripe and dry it you can make a wonderful fruity tea. I'm not so sure I would just eat them since they are a bit tart (a "bit tart" is a "bit" of an understatement! They're about the same sourness as a ripe cranberry), but steep with some mint leaves and pour over ice. A great summer iced tea!
Posted by Jen M at 9:05 AM