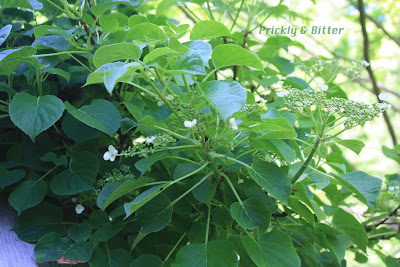 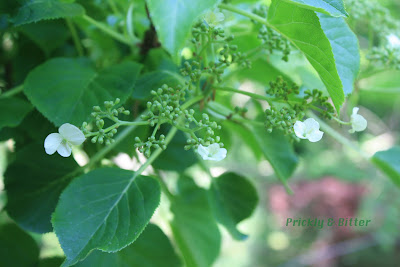 Like many species of hydrangea, the climbing hydrangea is native to Japan, Korea and Siberia. It prefers moist, shaded, cool areas for growth, which is why it's such a successful plant in Canada as an ornamental despite our harsh winters. Unlike other species of hydrangea, climbing hydrangea inflorescences, or groups of flowers, don't have all the flowers in full bloom at the same time. Contrast this to the big-leaf hydrangea that produces enormous blue and pink flower heads throughout the summer (coming soon to a blog near you!).

Once again, I have to bring up the issue of taxonomy when it comes to naming plants, and different "rules" when it comes to plant names. Traditionally, there are three schools of thought when it comes to the proper name of this plant. Way way way back in the good old days (I'm talking early 1800s), this species of climbing hydrangea was treated as a completely different species as the climbing hydrangea that occurs in China, Myanmar and the Himalayas. That species, Hydrangea anomala, is slightly smaller in overall size and leaf size but other than that they're basically identical. After a generation or two of botanists, someone decided that actually, the "species" that occurs in Japan, while distinct, isn't a species at all. It's a subspecies of Hydrangea anomala (which was named first, so that name gets priority) and so the name was changed to Hydrangea anomala subsp. petiolaris. A few generations of botanists later, and now it's not even a subspecies, they're actually the same species and climatic differences explains morphological variation. Then comes along DNA sequencing...and we still can't seem to get it right. Depending on what website you consult, it's either a subspecies or its own species. That would imply that there are genetic differences between the two populations, but the question is how much is enough to be considered separate species. It seems like every time biologists start to agree on an answer to that question, there's a well known species or genus that is an exception to the rule and the rule has to be rewritten.

This plant is becoming more and more popular as an alternative climbing vine to English Ivy. It doesn't have the ability to anchor itself as strongly to its supports (which is an attractive quality if you think you might ever want to take it out later...good luck doing that with English Ivy!) so often needs a little "help" in that department. It also produces attractive flowers (unlike English Ivy...it's basically just a boring leafy plant) during the summer. One disadvantage is that it does lose its leaves during the winter, so it's as insulating during the colder months. But still a great garden plant!

If left to its own devices it would be locally invasive, as in it can completely smother out any plant within about 200 square meters from it (except the ever-thriving Madagascar periwinkle). I have yet to see any seedlings popping up in any other location in our garden, so it doesn't seem to be very successful in sexually reproducing from seed which means the chances of it becoming invasive on a larger scale is pretty slim.
Posted by Jen M at 9:13 AM