The Liver and Onions of the plant world 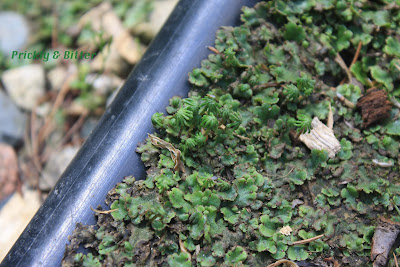 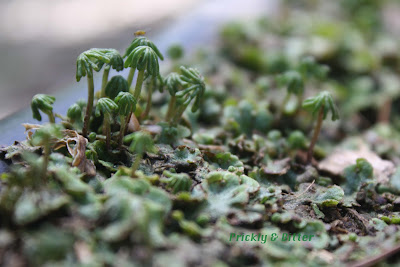 When it comes to ancient lineages of plants like liverworts, it's incredibly difficult to interpret "nativeness". The distribution of Marchantia polymorpha is worldwide in almost every habitat or ecosystem type around the world from the Arctic to the Antarctic, tropics to subtropics, and everywhere in between. There are two different life forms of this species, the male and the female plants. The second photo is a close-up of a cluster of female plants; the appendages on the umbrella of the female spore-bearing structures are much pointier than the male appendages. I have yet to actually see the Marchantia in the back yard produce a male spore-bearing structure. I'm not sure what determines what sex of umbrella is made when, but there seems to be a clear female-bias on this colony of liverwort. The other method of reproduction in the common liverwort is asexual through the production of structures called gemmae cups (pronounced like "jelly" only with m's in the middle). These structures are produced on the leafy part at the bottom that grows along the ground surface.

Liverworts have historically been considered part of a broad group of plants called the Bryophyta. This included the liverworts, hornworts and mosses; modern DNA sequencing has suggested that liverworts are actually their own ancient lineage, not more closely related to either mosses or hornworts (which are closely related to each other). All three of these types of plants are non-vascular plants, which means they don't have the ability to transport water and nutrients through their tissues. All three of these types of plants cover the ground or other substrate they live on (rocks, logs, soil, etc.) since they don't have the ability to transport nutrients higher than a few millimetres. Way back before the time of the dinosaurs the fossil record suggests that these plants, despite not having a way of transporting nutrients, achieved immense size, sometimes being as large as trees. Pretty incredible! How they managed that then and not now is probably simply a matter of competition: they were some of the first land plants, so they wouldn't have had many other plants around to compete with for nutrients and light resources. Now there are so many other plants around that they just can't compete anymore and stick close to the ground where they do best.
Posted by Jen M at 7:52 PM