The oak of champions 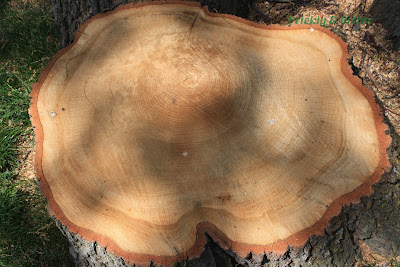 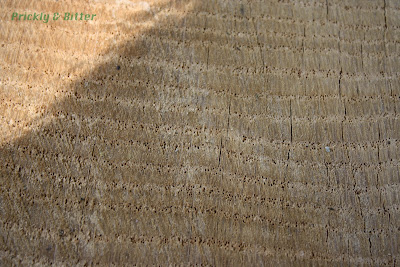 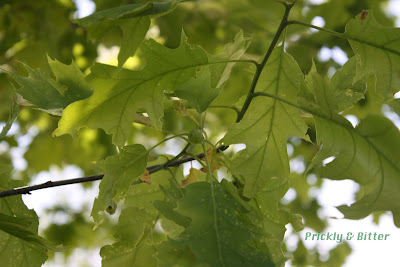 The red oak, who's "official" common name is actually the Northern Red Oak, is native to North America, specifically the northeastern United States and southeastern Canada. It is a popular ornamental and lumber tree worldwide, and has been spread across Europe and Asia. It's also the state tree of New Jersey.

The pictures I selected to showcase the red oak aren't exactly your typical tree pictures. We had three oak trees growing in the front yard: one angled slightly over the neighbour's driveway (they never park there anyway), one angled slightly over our driveway (it's just a car!), and one angled slightly over the house (...it's just a house?). Since the one angled slightly over the house swayed more than just a little in the wind, it was decided that it would probably be best to cut it down. The top picture is what's left of "Curly" from our Three Stooges trees. Upon closer inspection (middle picture), the stump actually shows some pretty cool things about red oak trees! Even using a regular camera lens, you can actually see some of the cells that make up oak wood since they're so large. These cells are present in all trees, just larger in some than others, and are called vessels. Along with tracheids, they are the two types of cells that conduct water up the tree from the roots to the leaves. What most people don't know is that the only part of the tracheid and vessel system is still useful in a tree, and that's what's on the very outside of the tree. Trees actually grow by adding a new layer of wood to the outside of the tree, pushing the bark further outwards (which is why bark cracks and has ridges in it!). So that "old wive's tale" that you shouldn't carve your name into a tree because it might die? It's true! Injuring any part of the new growth of a tree leaves it open to infection even if there's still enough remaining wood for water transport.

Another neat thing that you can see from this tree stump is the ring pattern itself. Not all tree rings are created equal! In temperate areas, we always have trees with rings. Tree rings are created by the tree's generation of new tracheid cells. These tracheids are larger in the spring because there's lots of water and nutrients around, and smaller in the summer because of the lack of water. This makes a difference in density of the wood, creating what looks like stripes in the wood to our eyes but are actually just gradients of different sized cells. Red oaks are also what we call "ring porous," where all of the vessels are restricted to the spring wood, giving an even more distinct ringed appearance of the wood (which also gives a more pronounced grain when turned into furniture or flooring).

The last picture shows a phenomenon called "oak apple," which is the result of a parasitic wasp called the gall wasp laying eggs inside the plant tissue. This causes the plant to release wounding hormones at the site, which then causes tissue to be rebuilt. The gall wasp exploits this reaction by the larvae injecting these hormones continuously into the plant, causing the plant to make a bigger and bigger gall or apple. Once the larvae have matured, they bore a tunnel out of the gall, moult on the gall surface into the adult form, and fly away. In general, oak gall won't kill or otherwise harm the tree except in localized areas. If you're planning on growing a "show tree," the oak apples themselves are not very sightly. But if you do happen to have them, you should be thankful! Oak apples are one of the sources of a reddish-brown pigment used as ink ever since the Middle Ages, and they're actually the main source of ink for some of the oldest, most important texts of modern times. Now you know!
Posted by Jen M at 9:20 AM