The flower of Chinese Warriors 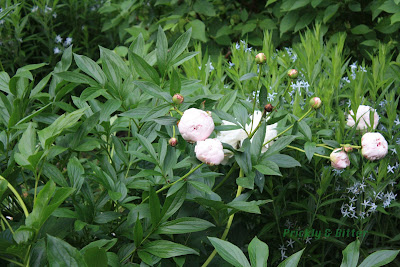 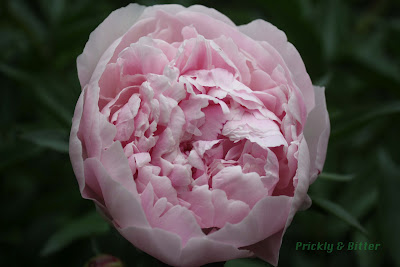 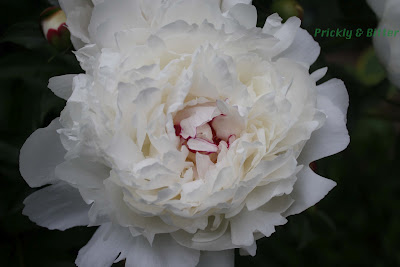 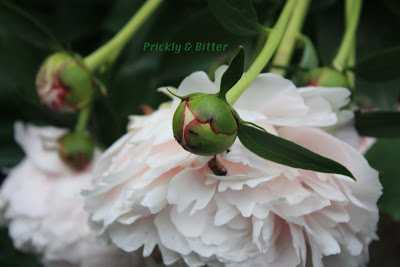 Based on the common name of this species, you can probably guess where the plant is native! Surprisingly enough, there are somewhere between 25 and 40 species of peonies (even DNA sequencing can't seem to pin down species limits, with different genes sequenced giving different pictures of how species are related and which ones are actually distinct species). There has been such an intense effort in cultivating "prettier" versions of this plant (mainly by the Chinese, Japanese and Koreans) that there are more cultivars of peony than almost every other ornamental plant; the only exception would be roses. Every year in China, Japan and Korea there are peony festivals in the spring when the plants bloom, and competitions for gardeners who can grow the prettiest flowers in various categories. There are also prizes given out for best new cultivars, so if you want a new and exciting peony for your garden that your neighbours don't have, those would be the places to go find them! When I was in Japan in May of 2006, the flower festival had just started and the peonies were in full bloom--and protected from the sun by umbrellas! It was one of the strangest things I had ever seen.

Most wild peonies, like most wild roses, look nothing like their cultivated relatives even within the same species. Humans have selected for detrimental mutants where the stamens (the part of the flower that usually produces pollen) have been modified into extra petals (and thus the plant can no longer reproduce). This is called "doubling" the flower, and you end up with the final result of having what appears to be thousands of petals inside the flower when there should actually only be about twelve. A aesthetically pleasing result, but not one that the plant would prefer! In fact, modern cultivars of peonies are completely dependent on humans for survival and propagation since they can no longer do it themselves. Some gardeners refer to that as the way that plants have domesticated us! We gladly help these plants out in any way we can: weeding around them to remove competitors, spraying them when they get a disease to make them healthy again, and trimming them back in the fall since only the new growth produces flowers. Humans are pretty easily manipulated by ornamental and agricultural plants!

Peonies are unusual in that they require grazing by ants in order for their flowers to open. Yes, those hundreds of pesky ants all over your flower buds actually serve a purpose! Don't go sweeping all of them off! The unopened flower buds produce a sweet nectar all along the outside of the outermost petals, and the ants walk along the petals and eat the nectar. By consuming the "glue" that holds the flower buds together, it allows the buds to spring open once enough of the nectar is gone. Why would a plant bother with this elaborate process for flower opening? Well, if there are ants around there are probably other insects around, too, which means the peony flower will be pollinated once open. A neat insect-plant mutualism.

Peonies have been valued, especially by the Chinese, for centuries not only as ornamental plants but also medicinally. Chinese art is often filled with peony flowers and the peony actually became one of the many preferred tattoos of Chinese warriors. Medicinally, historically it was used as an anti-convulsant and now is being researched for its antioxidant, anticancer and antipathogenic qualities. It has been suggested that one of the extracts from the peony, paeonol, can be used to modulate immune system function to help speed the body's healing after cancer treatment. This research is still in the very early stages, so don't get exited and start to eat your peony plants! Another reason not to do that is that many cultivars contain high levels of phenols in the leaves that can cause skin and digestive tract irritation.
Posted by Jen M at 9:35 AM