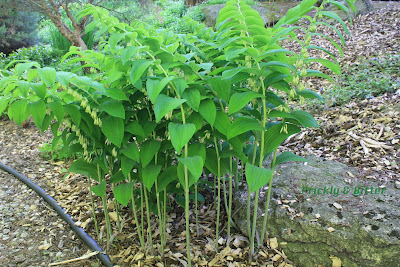 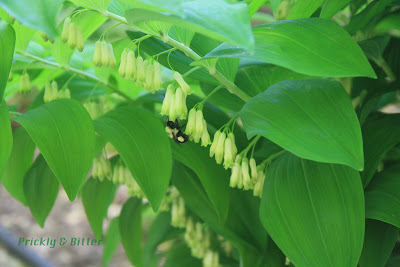 This is another one of those plants that I was positive was of European origins, but this species is actually from Eastern North America. There are at least six species of this genus (all of which carry the common name "Solomon's seal") native to Europe as well (we can't take all the credit...!). This is one of the many instances of where you have to be careful in usage of the common name of the plant, since there are actually two different species commonly referred to as "smooth Solomon's seal". Plants can't read the rule books to know that only one of them is allowed to have smooth leaves!

Almost all species of Solomon's seal are known for their relatively high content of a chemical called glucokinin. This chemical is the reason why this plant is potentially a great herbal treatment for certain kinds of diabetes, since glucokinin helps fight nutritional hyperglycemia, or the "sugar rush" you get after having a can of pop, chocolate bar, or a meal high in refined starches. This wouldn't be of benefit to everyone with diabetes since not all forms of the disease are the same, even within a "type" (in other words, not everyone with type 1 diabetes reacts the same way to insulin or sugar).

Historically, this plant was very popular in Native North American medicine, although not as much anymore. The plant grows from a rhizome, and the sap that can be extruded from this rhizome is reported to have strong antimicrobial properties and is effective in fighting infection at the site of an open wound. The sap from the rhizome is also quite effective at fading bruises quickly. The English herbalist John Gerard (alive in the late 1500s) once wrote: "The roots of Solomon's Seal, stamped while it is fresh and greene and applied, taketh away in one night or two at the most, any bruise, blacke or blew spots gotten by falls or women's wilfulness in stumbling upin their hastie husband's fists, or such like." Gerard was a rather interesting "botanist" (I use this term loosely, since he was somewhat formally trained as a barber-surgeon and not a botanist) and if you'd like to learn more about him other than his views on domestic violence (I'm glad times have changed!) then the Wikipedia page about him is quite good. You can find it HERE.

It is also reported to help with the effects of menopause and help speed the healing of broken bones. You're more than welcome to try the traditional preparation: dry the leaves in the sun and break into pieces, sprinkle 1 tsp of dried leaves into boiling water, allow to steep for 5 minutes, then strain and consume. If you notice your bones healing faster it's likely due to the placebo effect and nothing else, but you never know. Be warned: this plant is reported to also be a very strong laxative. Your coworkers might not appreciate it if you consume the tea outside of your own home!
Posted by Jen M at 9:56 AM