These flowers aren't for the dogs! 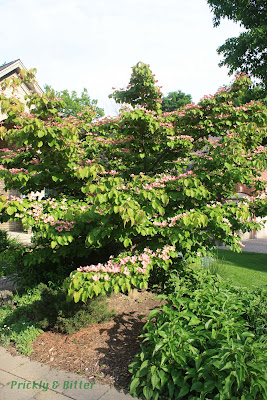 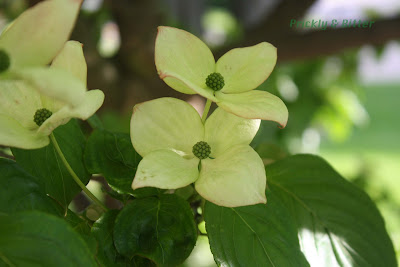 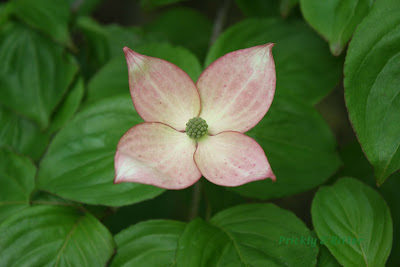 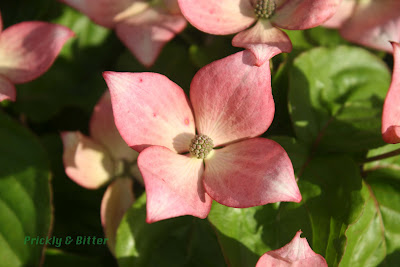 Based on the common names of this species, it should be incredibly obvious where this plant is native: The Himalayan highlands of China, mountainous regions of Korea, and the mountains of Japan. The bright, showy flowers are produced in May and June, with the red fruits ripening into September. Despite having two of these trees in our yard, I have yet to see the fruit actually successfully grow into a new plant so I highly doubt it has any kind of invasive ability. That being said, there is a native species of this same genus that produces brilliant white flowers that could be planted instead. The downside of the native species (Cornus florida) is that it is very susceptible to a fungal disease called "anthracnose," and the Asian species is much more resistant to this disease. For this reason it is favoured amongst horticulturalists.

Despite appearances, those aren't actually flowers that appear in the photos above. The pink or yellow "petals" are actually bracts that surround the flower, not the flower itself. The flowers are rather inconspicuous and are located in the ball of plant tissue in the middle of the bracts. Each tiny flower in the inflorescence must be pollinated in order for that inflorescence to turn into a fruit. All of the maturing ovaries of the flower merge into one fruit, kind of like what happens in a pineapple. The fruits themselves are actually edible, and are sometimes used to produce the unique flavour of some fruit wines without adding too much sweetness.

There are quite a few references to dogwoods in popular culture, the most relevant (to this blog, at least) being that many farmers back in the "olden days" referred to cold snaps in the spring as "dogwood winters." The implication of this is that it's not safe to plant this year's crops until the dogwoods have started flowering, as flowering will be delayed in suboptimal conditions.
Posted by Jen M at 10:18 AM