A Charlie Brown Christmas in May 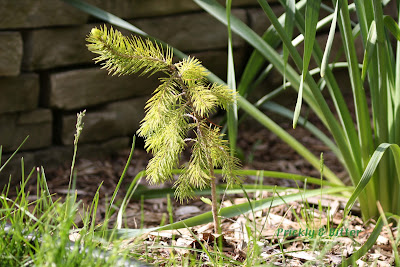 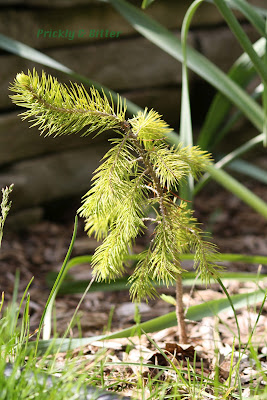 As the common name of this plant suggests, this tree is native to northern Europe. It has been present in Canada for many, many years and is often considered a "naturalized" plant. It is incredibly important to the Canadian softwood lumber industry, amongst other uses.

I'm not sure why, but Spruce seedlings in general always remind me of Charlie Brown trees. Anyone who has seen A Charlie Brown Christmas knows exactly what I'm talking about with the topsy-turvy, rather pathetic looking tree supporting Christmas ornaments far bigger and heavier than it should. Perhaps some of the reasoning behind that is that Norway Spruce are actually the most popular Christmas trees in North America, and any time you see a "traditional" Christmas tree farm this will be the tree of choice (more "modern" farms are now resorting to planting more than one species of tree since different people like different qualities in their Christmas tree; some bushier than others, longer needles, shorter needles, softer or harder needles, ones that stay on the tree longer, etc.). Conifer seedlings in general are great examples of the benefits a plant gets from interactions of plant roots and fungal threads called mycorrhizae. Seedlings without these interactions are significantly smaller and have fewer needles (and generally do not survive into "old age") compared to their mycorrhizal competitors. In fact, there are some species of plants that cannot survive without these mycorrhizae. This seedling more than likely does have mycorrhizae since it is growing right beside a very large Norway Spruce (which also likely has mycorrhizae to have become as large as it is) and is still alive and kicking almost 4 years after this picture was taken. My neighbours keeps threatening to rip it out of their garden (which I guess they're more than welcome to do...but how could they?! Isn't it just the cutest thing you've ever seen?!) but I always manage to convince them to give it another year. My hope is that eventually it will be big enough it's not worth pulling out!

Other than use as Christmas trees, lumber, and pulp for paper, Norway Spruce trees have been symbols of thanks between Norway and the United States, Scotland and England since the end of World War II. Every Christmas, Norway sends one giant Norway Spruce tree to Washington D.C., New York City, Edinburg, and London which is meant to be displayed in the most central square of each city. While this is not the origin of the Rockefeller Christmas Tree in New York City, this is the tree on display as the Trafalgar Square Christmas Tree in London, England. The tree is a symbol of thanks for the assistance given to Norway during the Second World War, but also as a token of gratitude for the ongoing good will between these countries.
Posted by Jen M at 4:56 PM