The bitter bane of dogs 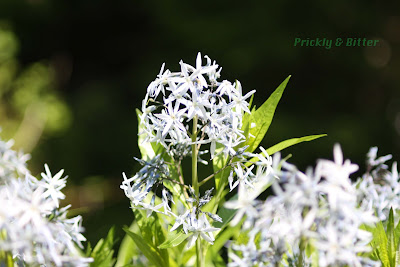 Every year this plant flowers in the back yard, I think to myself "we should rip this out." It just keeps getting bigger and more unruly. It can't possibly be a native plant! Well, apparently it is. And a native plant that's not known to be especially vigorous even in its native range, let alone slightly north of its range. I guess it can stay!

The Eastern bluestar is native to the Northeastern United States, and likely into Canada, too (but like political boundaries, the range of this species appears to end at the border...). This plant was voted in 2008 as being one of the top 10 most sustainable plants by the Phipps Conservatory due to its non-invasive habit and its ability to resist insect predation and fungal/bacterial diseases. As evidence by its growth abilities when being ignored in my back yard, it doesn't need any kind of supplemental fertilization, and the plant actually looks better in low nutrient soil (in nutrient-rich soil the plant becomes very spindly and is unable to remain upright on its own). It is also incredibly drought-tolerant which is good for warm, dry Ontario summers.

When the stems of bluestar are broken, a milky sap is exuded. Those with sensitive skin should use gloves when handling portions of broken stems; the sap contains a bitter alkaloid that can cause skin rashes, blistering and burning. If you're going to pick these plants to use in a flower arrangement, you can decrease the chance of skin irritation by very briefly burning the ends of the stems to prevent the exuding of the sap. Keep in mind that this would also seal off the stem to the possibility of pulling water into the stem; flowers won't last long after this is done. The alkaloids in the plant also mean it should never be consumed, and caution should be exerted if planting this plant in a garden exposed to small children (their skin is more sensitive).
Posted by Jen M at 8:18 AM