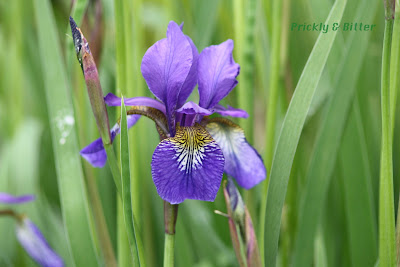 This species of Iris is native to eastern Asia (China, Mongolia, Russia and Japan) and, like it's Yellow Flag cousin, enjoys having it's "feet wet" in damp soil and grows well as an aquatic plant. Since the flowers are a vivid purple, one can guess (and would be correct in that guess) that the most popular pollinators of the blood iris are bumble bees. Unlike it's yellow cousin, it cannot fully tolerate the "true" conditions of a bog (it will grow happily for a while, but it's not a good competitor) where the water is about pH 4.0. It requires only slightly more alkaline water and/or soil at a pH of at least 5.0 (up to pH 6.5).

Gardeners would describe this plant as being "prolific," which should suggest its invasive nature when conditions are optimal. The blood iris reproduces equally well from seeds and from the uprooting and disturbance of its rhizomes, which can re-root themselves into the ground and produce new plants. Merely pulling the plant out of the ground (which is actually incredibly easy) and throwing it onto a trash pile will grow a new patch of blood iris.

One of the attractions of this plant as a flowering plant for the garden is its late flowering time, depending on your location. In my garden this plant usually flowers from the end of May to the beginning of July, which is actually quite late as far as "spring flowers" go. As with other irises, all parts of this plant should be treated as toxic and this plant should not be consumed in any capacity.
Posted by Jen M at 3:43 PM