Is the fleur-de-lis really an iris? 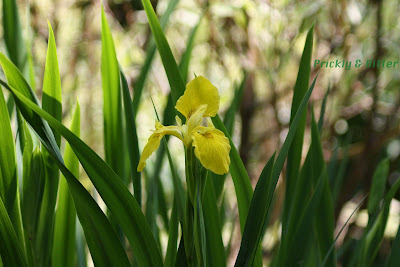 The yellow iris is an aquatic plant native to Europe, Asia (western) and Africa (north coast). It thrives in aquatic conditions, especially where the water is of low pH (it does very well in bog-like conditions where many other aquatic plants cannot survive), the plant is partially submerged, and the rhizome experiences constant anoxic (oxygen-deprived) conditions. In North America, these are the reasons why (coupled with the fact that it is a very popular pond and garden plant) it has the potential to become invasive. I would argue (and I think others would, too) it has become invasive already in certain areas like the Byron/Sifton Bog in London, where it can out-compete native aquatic plants for resources. Some regions in North America have banned the sale and planting of this plant due to its potential to become invasive, but most gardeners and landscape companies continue to plant it unaware of its potential for environmental destruction. Because Ontario does not recognize this species as invasive, I have not highlighted the invasive box.

Aside from being potentially invasive in non-native habitats, this plant is incredibly important throughout its native range for other species. It can form a very dense cluster of vegetation, so is prime breeding ground for fish, frogs, and birds. There is even one species of bird in Scotland that is endangered called the Corn Crake that uses yellow iris patches as breeding grounds. The bird is a ground-nester, where it lays its eggs directly in a nest made of grass leaves in a hollow in the dirt. This is especially easy in a patch of yellow iris since the leaves are so easily detached from the rhizomes underground.

Like all irises, the juices from a cut rhizome are irritating to the skin, so gardeners planting this species should wear gloves (especially those with sensitive skin). Historically, this plant was used medicinally as an emetic. More recently, it was discovered that this species is especially effective at taking up heavy metals through its root system and has this has led to experimentation with this plant as a water clarifier.

Many have argued that the fleur-de-lis (used on the Quebec flag and in Quebec and France as a decorative symbol) is a stylized version of an iris (despite the name "fleur-de-lis" meaning "lily flower"). I would say based on the name alone it's more likely designed from a yellow or white lily than an iris. The fleur-de-lis doesn't look much like either, does it?
Posted by Jen M at 9:14 AM