The Master of the Woods 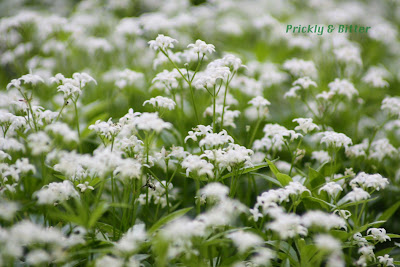 This photo doesn't quite do this plant justice; if I find another one hidden in my plant photo folder somewhere I'll post another to show size and perspective. This plant is native to Europe, the Middle East and/or Asia (depending on who you ask or what literature you consult -- in any case it's non-native) and there's a reason why it's sometimes referred to as the "Master of the Woods" in North America! It's incredibly shade-tolerant, often setting more seed (which are in the form of burrs; my cat hates this plant, as do most deer) in the shade than the parts of the same plant in the sun! It can spread through the simple action of raking up the stolons (very similar vegetative organs to rhizomes, except they're usually above-ground and have very little nutrient storage) and leaving the plant pieces on the ground, or even just running the whipper snipper along the edge of the garden to "edge" the plant. It will re-root and regrow, making it a very effective spreader. It measures only about 10 cm off the ground at its tallest, so is an effective (and very popular) ground cover.

If you've ever seen this plant in person, you know what kind of smothering ability it has so it should be no surprise it can out-compete native ground cover plants for resources. I haven't read anything specifically stating this plant is a noxious weed, but it sure should be considered one! I would argue it's boring enough that if it was banned as an ornamental plant in North America no one would miss it. Well, that's if you could get rid of it in the first place -- I've been trying for a few years on a small patch in my back yard and it seems every time I pull a chunk out it's back in a couple days with more dense growth. I wish you luck if you planted this as an edging plant then decided later to re-landscape!

As for non-ornamental plant uses, this plant has many. It is a great source of coumarin (the contributing chemical to its intense odor; NOT to be confused with the drug "coumadin," they are not the same thing!), which has been used in perfumes since the late 1800s. It is also one of the leading chemicals in "organic" rat poisons, since rats metabolize this chemical into something that causes massive internal hemorrhage and death. Pleasant! Humans do not have this metabolic pathway, so you don't have to worry about it causing massive organ failure if your child (or pet...unless you have pet rats) accidentally ingests it. The effect on other animals is one that has been investigated by the weight-loss industry to no success: it acts as an appetite-suppressant in many herbivores, contributing to the low levels of herbivory it experiences in the wild. Humans don't seem to be as receptive to this effect, for reasons (to my knowledge) unknown. It has been reported to have anti-HIV, anti-tumor, anti-hypertension, anti-arrhythmia, anti-inflammatory, anti-osteoporosis and antiseptic properties and so is currently being researched actively for any major medicinal use. Due to its rather nasty effect on rats, coumarin has been banned in all commercial food products in the US, despite not being as dangerous to humans. It is used in the food industry in Germany, however: it is the major flavouring agent in the beverage "Maiwein" or May wine. It is used in many other countries to flavour alcoholic beverages and alcoholic jellies as well.
Posted by Jen M at 4:02 PM