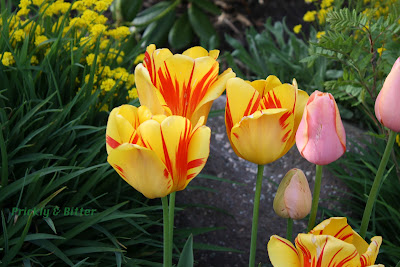 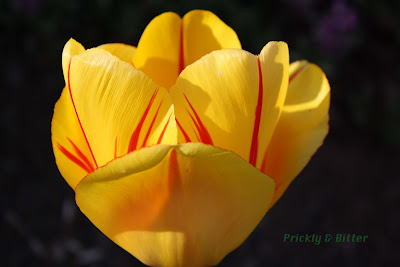 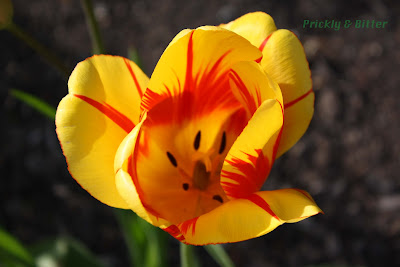 I took these photos when my friend Tanya and I were in Nova Scotia for a conference in May one year. The tulips there were in full bloom (they were a little past their prime in Ontario, but it's cooler in NS so it was a nice colourful surprise), along with the rest of the late spring wildflowers and cultivated flowers.

Tulips have a long-standing tradition of being one of the most popular ornamental flowers to humans worldwide. The Dutch were the ones that got the ball rolling during the Ottoman Empire (weren't you disappointed, too, to learn that this wasn't named after the invention of the footstool?) in the mid-1500s. Officially, the first documented case of planting tulip bulbs in Europe was in 1559 in Germany, with the bulbs arriving in the Netherlands in 1593 (the bulbs being planted at Leiden University). On the books, 1594 is the first tulip flower year for Holland, and these first flowers were the ones that led into Tulipmania and the commerical tulip flower trade.

Tulips do grow from bulbs and take many years of growth to build up the storage tissue in the bulb before they are prepared to flower. If you were to grow a tulip plant from seed, depending on the variety it would take between five and eight years to wait for a flower to appear. That's a lot of waiting, and an amount of time most people are not prepared to invest into an ornamental garden. So how is it that we put bulbs in the ground and they flower in the spring? Well, someone else has done the waiting for us. In fact, Holland is still the biggest grower and exporter of tulip bulbs worldwide (they've had a lot of practice!), and they dig up the bulbs that have formed every year and sort those by size. The bulbs big enough to flower the next spring are sent for export and sale, while the ones too small to produce a flower are set aside to be planted again. By the time you buy a bulb in the store, it has been deemed by the experts to be ready for flowering. If you do plant bulbs and not all of them flower, don't despair! Give them another year and I'm sure you'll be happy with your efforts. If you've been paying attention, you should be able to point out based on the third picture that tulips are monocots (click here for a refresher course in monocots vs. dicots, look at the third paragraph), since they have flower parts in multiples of three: three petals, three sepals (since they look so similar, we call them tepals like in Easter lilies), six stamens and three lobes on the stigma.

Tulipmania is often regarded as the first economic bubble in human history: tulip prices in 1637 skyrocketed to almost 10 times the annual salary of a skilled tradesman (that would be like you walking into a garden store with the keys to a ferrari, leaving the ferrari and taking a marigold plant home with you), then suddenly crashed. For those people that "cashed in" on the tulip market and sold everything, they also lost everything. To get fancy patterns on tulip tepals, the bulb must be infected with a virus called the Tulip Breaking Virus, or TBV. This is what causes the streaks of colour running vertically along each tepal. Since the virus must be in the bulb to cause the colour pattern, this pattern can only be seen in the mother plant and not in the seeds that plant produces. For this reason, "broken" tulips are relatively rare, and at the time of Tulipmania they were incredibly valuable. The most rare variety, called Semper Augustus, was not only a broken tulip but also a black tulip. To see a black flower is incredibly rare in nature, and for it to also have white streaks running through the tepals made them especially sought-after; so much so that there's a documented case of someone offering 34 acres of land for one Semper Augustus bulb.

The bubonic plague is also tightly tied to the story of Tulipmania: in 1637 the tulip trade came to a grinding halt since no buyers of tulip bulbs showed up to February tulip auction. The speculation for why this is the case is that the plague was rampant during this time, and there was widespread fear over catching it in populated places. Since tulip auctions always drew large crowds, the crowd just decided this time to stay home. By May of that year, the price of tulips was back down to baseline levels, and have remained relatively stable even today.
Posted by Jen M at 8:13 AM