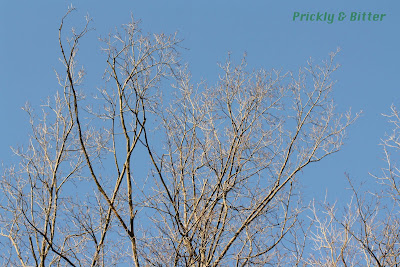 So this isn't your typical thoughts when it comes to a maple tree. And this probably isn't the kind of image you want to see when promised that spring is "right around the corner" (aren't we promised that every year at the end of March?!). But it's a fact of life that trees lose their leaves in the fall, overwinter as a bunch of upright sticks, then grow new leaves in the spring. But do all trees do that?

Unfortunately, nothing in Biology ever has a rule for which there are no exceptions. We can say that all trees lose their leaves then regrow them at some point in their life cycle, but that would be just plain false. An important concept to introduce is the difference between evergreen and deciduous trees. Evergreen trees are exactly what they sound like: always green. They never lose their green parts, and they're always biologically "active", even when it seems like all that they're doing is sitting there. In elementary school you learn that conifers are evergreens, and everything else loses their leaves. In reality, this is false. MOST conifers in Canada are evergreens, but there are some clear exceptions like Dawn Redwoods and Larch (and a few others, but those are extremely uncommon in Canada). Deciduous trees are those that lose their leaves in the fall to regrow them in the spring, and are often thought of as being the leafy plants. This is also not entirely true, since there are many tropical leafy trees that are considered evergreens since they never lose their leaves.

Another misconception is that the way the seasons work in Canada is the way they work everywhere. In reality, almost every country in the world has "seasons". Even tropical countries right on the equator that have no clear distinction between spring, summer, fall and winter still have a wet and dry season. In fact, we have the same thing in Canada: winter would be considered our "dry" season since the only form of precipitation (snow) is biologically unavailable to plants. The soil is also too cold to allow for water absorption, so the trees go dormant. Same thing in the tropics: during the dry season, many deciduous trees will lose their leaves and enter dormancy to regrow them during the wet season. There are some plants in the tropics that take this to an extreme, and any time there's a period of drought (anywhere from 7 to 14 days without rain, and it doesn't matter what time of year it is) the tree will shed its leaves and regrow them all after the next rain. A neat example of nutrient cycling in the tropics; nutrient recycling in temperate countries could never happen this quickly, and so if a tree shed its leaves any time it didn't get water for a prolonged period it would never be able to grow them back fast enough and would die.
Posted by Jen M at 9:54 AM