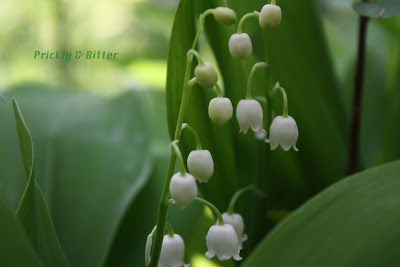 Common name: Lily of the Valley, May bells, Our Lady's Tears

The Lily of the Valley is an incredibly common spring wildflower through most of North America, Europe and Asia. Where it originated is still up for debate; some call it common to North America while others say it has been "naturalized", meaning it didn't evolve here but it's been here for so long it might as well have. Either way, it has adapted to survive and thrive in a wide variety of environments, and is incredibly cold-tolerant (surviving temperatures up to -35C). There is also an ongoing argument of whether Lily of the Valley plants are invasive or not (since they seem to spread so readily); I have given the plant the benefit of the doubt and said it is not.

The Lily of the Valley has some historic medicinal use, but is rarely ever used now as anything other than an ornamental plant. Historically, it was used by native tribes as as "piscicide", meaning a chemical that kills fish. The roots and/or leaves would be macerated in a bit of water to make a sort of sludge, releasing saponins from the plant (saponins are chemicals that produce a soap-like reaction when shaken in a liquid). This sludge would then be dumped into a stream that contained a lot of fish, incapacitating or killing the fish very quickly. They would then be collected from the surface of the stream and processed. This form of fishing has been banned around the world but it still practiced in a very restricted way by indigenous people in some countries (like Guyana). Saponins in general are not overly toxic to most humans (some people have a sensitivity to it, but you would have to ingest an obscene amount of plant material to be poisoned by saponins), but they do have a bitter taste and so are not ideal in food products. What makes Lily of the Valley a toxic plant is the high concentration (and chemical diversity) of cardiac glycosides that are stored in all parts of the plant throughout its development. These chemicals are concentrated in the rhizome underground in the fall (to protect it from herbivores over the winter), and in the berries in the summer (to protect the seeds from being eaten by animals). The berries are often interpreted as an ideal snack-food source by small children since they look so appealing, and so every year there are a few cases of death as a result of poisoning from Lily of the Valley berries. To adults, most of the results of berry ingestion would be abdominal pain, diarrhea, vomiting, and a reduced heart rate. If a large enough amount of these berries were consumed, death would be the result.

There are many tales associated with these flowers, most revolving around the time of flowering of this plant being in May (the Latin name of the plant, Convallaria majalis, means "of/belonging to May"). The French use it as a symbol of spring, selling it tax-free in shops on Labor Day (which there is on May 1st). One of the common names of the plant, Our Lady's Tears (sometimes also Mary's tears), originates from the idea the plant sprouted under where the Virgin Mary was crying after Jesus was Crucified.