It must be spring when the grass turns golden 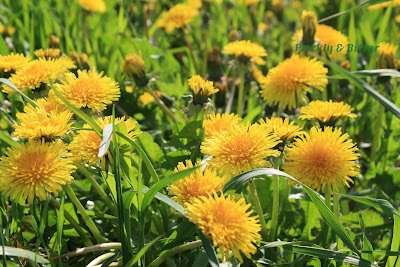 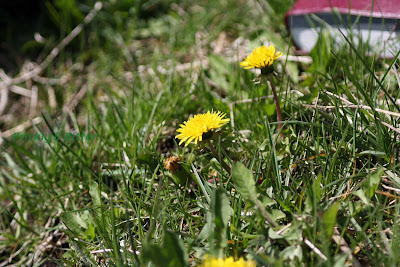 This probably isn't the average person's idea of a "beautiful plant", especially if you own your own home, but they play a pretty significant role in the biology of North American urban ecosystems.

The origins of dandelions aren't entirely clear, but they're believed to have originated in Europe, coming to North America many hundred years ago. The number of groups that the common name "dandelion" refers to varies depending on the authority (70 microspecies according to Rothmaler, 3 subspecies according to Barnes and friends). The biology of these plants is similar to the last weed of the blog, garlic mustard, except that it is not a biennial but an annual plant. Anyone who has ever had to pull dandelions knows all about them having a taproot, or a very fleshy root that extends down into the soil. If you don't remove the taproot when removing the plant, it can use these energy stores to regrow anew, and your problem with lawn weeds never goes away. Annual plants are ones that complete their life cycle in one growing season or less (and in this case, less). Dandelions can often have multiple growing seasons in a year (one plant's seed will germinate and produce a new flower and new seed before the end of the growing season), which contributes to their success as a weed. Another major contribution to their success is human activity. What most people don't know about dandelions is that they actually thrive in highly disturbed areas. When you mow your lawn once a week, you are creating a highly disturbed environment. By keeping grass shorter than it likes being (aesthetics say that grass should be 3-4 cm in length, biology says that grass should be 5-7 cm in length), you are also creating the ideal growth and reproduction conditions for dandelions. They can very quickly grow to be taller than the grass, monopolizing the light resources and growing faster than what grass can control. People who have well-manicured lawns with large inputs of artificial fertilizers will always have more dandelion growth than those that don't. Just one example of plants exploiting humans to further their reproductive goals.

One other major way that dandelions contribute to changing urban ecosystems is through spraying. Recently in Ontario the government just passed a law saying that you cannot spray using chemical pesticides for aesthetic purposes on urban lawns (except where revenue is acquired through their maintenance, like with the case of golf courses) due to the health hazards that pesticides have. Whether or not pesticides in the concentrations children are exposed to from a lawn are harmful or not is somewhat beside the point (not that I'm against children, but the major effect that pesticides were having was not on the youngest human members of the Earth in the formula that we used them in North America). The major reason why this was so pivotal for ecosystems in general is because now we can no longer force the input of these toxins into the groundwater, which impacts species further down the line. The type of pesticides used were called broadleaf defoliants, and were chemically based on Agent Orange (a chemical used in warfare in the Vietnam War). These would selectively kill any plant with broad leaves, while leaving the grass (which has narrow leaves) alone. Great for a lawn, but not so great for natural ecosystems affected by the groundwater runoff from our lawns.

Has the banning of commercial "non-organic" pesticides for aesthetic use in urban systems had any effect? So far I think it's hard to tell. There have definitely been changes in plant communities previously affected by large amounts of urban runoff, but have those changes been because of concerted conservation and rehabilitation efforts, or because of our changing pesticide use? Only time will tell.
Posted by Jen M at 11:14 AM