A mustard for all seasons 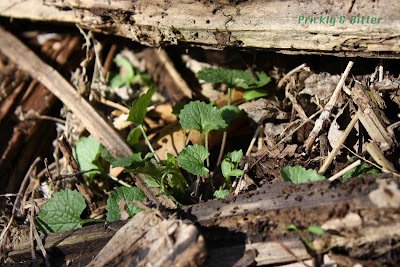 Garlic mustard is an invasive plant in Ontario, originally from Europe, and central and western Asia (it was brought to Canada with European settlers in the 1860s for culinary purposes). It is a biennial plant, meaning it takes two years to complete its life cycle. The first year it spends growing large, round leaves (like in the photo above) as well as storing resources underground in its storage taproot (like a carrot). The next year a new stem grows, elongating as flowers mature. The fruit it produces are long seed pods, which are somewhat elastic and release seeds through an explosive mechanism when they are mature.

In its native habitat, garlic mustard almost exclusively grows near hedgerows and in ditches (and is not invasive), hence it's British common name of "Jack-by-the-hedge". When young, the leaves smell quite intensely of garlic when crushed and so that's the origin of it's common name (and it's in the mustard family). A traditional use of garlic mustard when young is as an "exotic" salad green, but make sure you use it sparingly--it does have quite a strong taste. In the second year of growth the leaves are much smaller and so not as easily picked to eat. The taste also changes quite a bit from year one to year two, and I haven't heard of any instances of people picking leaves from the second year of growth for culinary uses. It was once used medicinally in Europe to disinfect wounds (which probably worked to some degree; any plant that has a very strong odor likely has at least some antimicrobial capacity) and as a diuretic (if this is also true, another good reason not to eat a lot of it in one sitting!).

An invasive species in Biology is a species (usually a "foreign" species, but not always) that can out-compete native species for resources and completely takes over a habitat. Garlic mustard is an excellent example of that: very rarely do you see a plant growing by itself, and where you have dense garlic mustard growth you have very little of any other kind of ground cover. The unfortunate part of this scenario is that it has almost completely eliminated suitable native habitat for the White Trillium, the provincial flower of Ontario. This flower is becoming more and more rare as time goes on, only existing in great numbers in small pockets in Ontario and elsewhere. To confound this, deer also preferentially eat trillium when given a choice between that and garlic mustard, so they're not only assisting in the removal of trilliums in Ontario forests, but also helping the garlic mustard "live long and prosper," as Trekies would say.

So how to control garlic mustard? Well, the short answer is you can't. Because it's a biennial plant (and the growth forms between the first and second year look so different), if you don't pull it out in the first year it WILL come back the second year. Once it flowers, the seeds are so successful in the environment that the population explodes on a localized scale, meaning the population can grow exponentially every year. There are no chemical methods that can be used on these plants, as anything that kills garlic mustard will also likely kill all of the native wildflower species and new shrub or tree growth. The only real solution until we come up with something better is to pull them out by hand. If you choose to take part (or start) in a garlic mustard eradication program (which you should!), make sure you're pulling as much of the root system out of the ground as you can, and if the plant has fruit make sure you do not disturb them and disperse seeds. I have seen people walk around with kitchen shears and three garbage bags inside each other to cut the flower heads or seed heads off the plant first, then pull it out of the ground. Perhaps a bit of an over-kill, but better to be safe then sorry!
Posted by Jen M at 2:45 PM