To love and to cherish 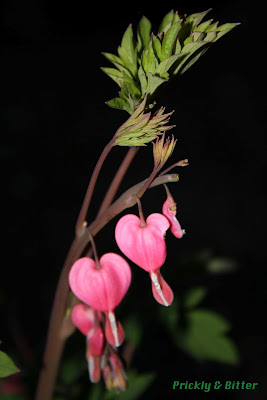 Bleeding hearts are some of my favourite flowers because they’re a great example of flower shape variation in the plant kingdom. I took this picture in my back yard, where they were growing along a steep slope that most rainwater entering the back yard runs down. They can tolerate soil that’s occasionally very wet as long as the soil drains well. Like all really odd-looking, showy plants in Southern Canada, bleeding hearts are native to Asia and were brought over to North America to be used as ornamental plants. While their flowers are extremely convoluted and most insects find it difficult to reach the nectaries of the flowers, these plants are remarkably successful at reproducing. This implies that they have found at least one insect partner that helps them cross-pollinate. Growing this plant where you are likely to come into contact with it is not recommended if you have sensitive skin; it contains a chemical that can cause rash, itchiness and general discomfort. This plant also has a white variety, but it's significantly less spectacular when flowering than the pink version.
Posted by Jen M at 7:56 PM