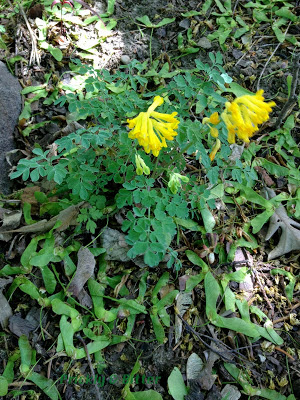 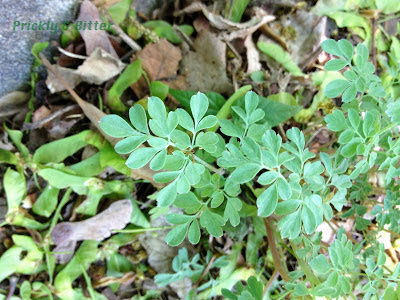 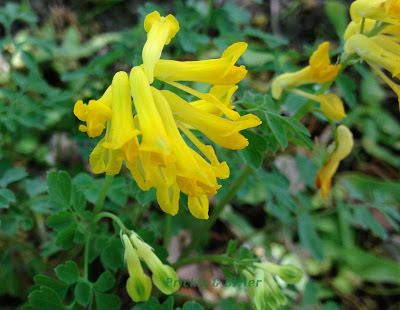 Looking at the pictures I took of this plant in Sandra's garden reminds me of how darn windy it was that day; it took me almost 12 pictures to get a decent shot of the flowers since they're so small. Seems like any time I want to take macro shots the wind picks up! This plant is often confused with a very similar genus, the one which the yellow corydalis gets its common name. There are some yellow-flowering corydalis species, and three of which are even native to this area. Unfortunately, this isn't one of them. This yellow corydalis, the rock fumewort, is native to Italy and Switzerland and can become invasive here if not kept in check. The leaves and flowers are both very similar to species of Corydalis, so its understandable for the confusion. Interestingly, the family that this plant belongs in is also often confused! While researching this plant, it was placed in either the Ranunculaceae, the buttercup family, or the Papaveraceae, the poppy family. Which one it truly belongs to I have no idea; since experts in the field can't seem to agree I'm not even going to try to make up my mind! What I do know is that the leaves, with the divided leaves that look similar to fern fronds, look far similar to members of the Ranunculaceae than the Papaveraceae.

The other common name of this plant, the rock fumewort, comes from its ability to grow in seemingly the tiniest of places in a solid rock wall. The seeds do not need a lot of soil to germinate and grow, and the roots can readily absorb nutrients from the smallest pockets of soil to provide the plant with energy. There are also specialized structures that the plant can produce in its roots that are similar to potatoes and meant for the same purpose: starch storage. This means the plant can accumulate sugars from the leaves while it has access to lots of nutrients in soil, and as the nutrients in the soil are depleted it can tap into its own starch storage for fuel to continue growing. This would be the same thing a potato or carrot would do if we gave it the chance! Typically when a plant has a common name with "wort" in it, which means "plant," often was once used for medicinal purposes. I'm not sure what an ancient medicinal use of this plant would be, but it is currently being examined for potential uses as an anti-psychotic drug for use in the treatment of psychoses associated with schizophrenia. Extracts are taken from the leaves and so far they've been showing promise with interfering with neurons (brain cells) at their synapses (where the cells communicate with each other) to prevent the communication between them. Normally this would be a really, really bad thing; if your neurons can't communicate then you can't exist as a normally-functioning human being. All of the information that you receive through your five senses is assimilated in your brain via neuronal synapses and neurons talking to each other. Sometimes, however, this effect can be detrimental if your brain "creates" things that aren't there via neurons communicating with each other when no external stimulus is present. We call these "creations" of the brain psychoses, deliriums or hallucinations (depending on how they're caused and what kinds of symptoms they present) and in psychotic schizophrenia (I'm sure there's a different name for it now; the names of mental illnesses change with the seasons it seems) this happens to an extreme. I'm certainly no neurologist, but some drugs target certain neurons at certain times in certain amounts, which can decrease the symptoms of schizophrenia. All sounds like a bunch of magic to me, which is probably why you should all be happy I'm not a neurologist!

So "can I eat it"? Well, like the last plant I profiled (the grape hyacinth, which you can read all about HERE), there's no suggestion that you can't eat it. But since extracts from the leaves and roots have the ability to interfere with your brain's ability to communicate with itself, do you really want to risk it? There are so many other wild plants that are edible I would choose a different one.
Posted by Jen M at 4:27 PM