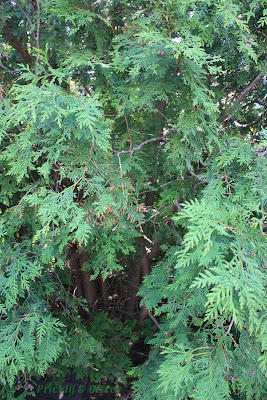 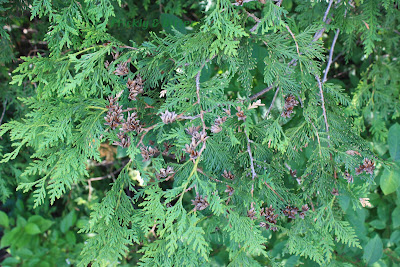 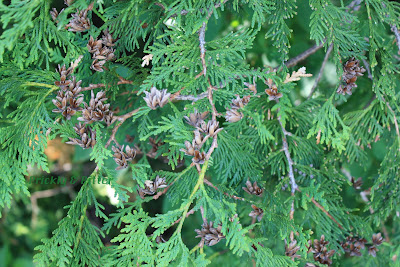 This species of white cedar (or, as has recently been proposed, "whitecedar" since it is not a true cedar at all) is native to Canada from Manitoba east to Nova Scotia and as far south as Vermont. Despite the fact that the plant can grow up to 30 meters in height, it is often stunted and rarely grows beyond 15 meters tall. Interestingly, trees of this species are likely the oldest trees in North America; there are individuals in southern Ontario that are estimated to be over 1500 years old! Dead stumps have been dated to be 1650 years old, but due to their circumference they're often estimated to be much younger. In 1731, a French explorer in Minnesota described an interesting individual that he named the "Witch Tree" due to it's gnarly appearance. He described this tree as being fully mature; it is still alive and well today.

The most important use of the eastern white cedar today is as an ornamental species. It has other roles in the lumber industry, mostly in fencing, shingles, and log cabins due to its ability to withstand decay. While the foliage does have quite a strong odor, the wood is not as strongly scented as the true cedar, Cedrus, which is the most common type of cedar to be used in furniture-making. Historically, this plant has been (and, to some extent, still is) very important to the Ojibwe culture. They used the foliage to make a tea that was taken for constipation and headache. A tincture of the inner bark and young twigs was often used to treat warts, ringworm and thrush. The bark is rich in Vitamin C, and is hypothesized to be the cure for Jaques Cartier and his party's scurvy during the winter of 1535. The foliage contains relatively high levels of a chemical called thujone which is a neurotoxin. Herbal treatments that have a base of white cedar should not be used over extended periods and not used while pregnant.
Posted by Jen M at 9:16 PM