Sandra's Garden: proof not all Phlox are created equal 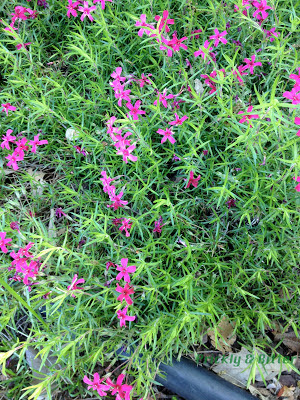 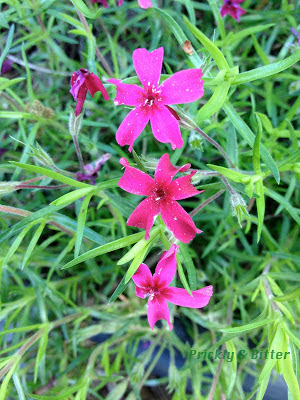 Last year I posted a blog about moss phlox, a native species we have in our garden that gets a little out of control in really sunny areas. It's a species native to North America, and one that occurs relatively commonly throughout its native range in bright and sunny, damp areas (despite also being drought-tolerant). It is much more common in the United States than in Canada. I knew this species was a popular garden plant based on what I've read about it, but I had never seen any of the cultivars created in greenhouses aside from the "normal" light purple type. Well, here's a spectacular demonstration of the "hidden" morphological variation that some plants contain. This variety of moss phlox was not created in the lab, but is a product of controlled breeding. Despite this, you would never find this variety of phlox in the wild unless it escaped from someone's garden.

So how do we "create" morphological variation in plants that is not typically seen in the wild? The secret is some patience, and a lot of time on your hands (it helps to have a greenhouse because it speeds things up a bit). Natural mutations in the wild create different alleles, or copies of a gene, that can show different morphologies if they have a chance to be expressed. Most of these mutations are what we call "recessive", which means you have to have two copies of the gene in order to be able to see the effect. This is good for the plant if the mutation is detrimental, but bad for gardeners if the mutation is something we want to see. In order to increase the number of recessive mutations in a population you back-cross the plants (breeding a daughter plant with a parent plant), or force inbreeding (forcing a plant with the gene to pollinate itself; sometimes this isn't possible in plants). After enough generations, which can be anywhere from 10 to over 1000 generations to get a pure line, you have a plant that shows only the allele you want expressed. Most garden plants are created this way; you back-cross over a certain number of generations until you get the desired effect in nearly all seeds grown. A huge downside of this type of selective breeding and back-crossing is that you're decreasing the genetic diversity in a population by selecting the alleles you want expressed and eliminating all others. For most plants this isn't a big deal; the ones grown in gardens are hardly reflective of the population as a whole in most cases, and if a virus or fungus or bacterium evolved that could eliminate an entire population of ornamental plant because of the inbreeding and a lack of resistance it wouldn't matter much. You would replant the next year with a different variety and hopefully the problem is solved. The big problem occurs when we start doing this with crop species, as we have been doing for over 12,000 years. Corn, for example, is so susceptible to disease that it is completely unable to survive without human intervention (not to mention we have eliminated the corn plant's ability to disperse its seeds; this is a slight problem if you're a corn plant but a major benefit if you're a human wanting to eat corn seeds). Soybeans in North America right now are on the verge of a massive population collapse due to the fungal disease called the soybean rust. It has recently shown up in the southern United States and is attacking soybean crops that have all shown to be susceptible to the disease. We grow the same variety in Canada (bred to have an increased seed size with an increased oil store in the seed), but are only saved from the attack of the pathogen due to our much colder winters that the fungus can't survive. It's only a matter of time before an entire year's crop is wiped out which could be absolutely devastating to the North American economy.

The previous blog post I did about this plant (which you can read about HERE) mentioned the smell of marijuana that this plant supposedly has, and the drug busts that have occurred as a result of people innocently growing moss phlox and having the smell waft in the wind. I did pick some leaves and crush them up; if you use your imagination I guess it smells like marijuana. I have a hard time believing that it would produce enough of a scent to convince someone there's a drug op in their neighbour's back yard, and I also have a hard time believing that someone would mistake the smell of phlox for the smell of marijuana!
Posted by Jen M at 1:58 PM