Sandra's Garden: When two become one 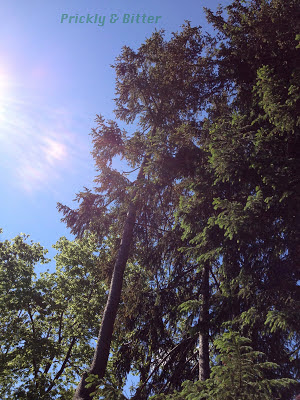 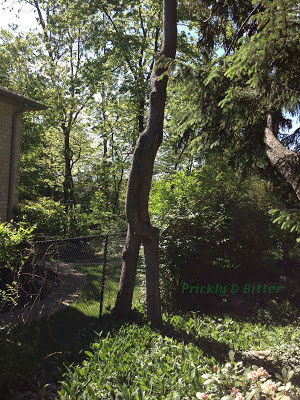 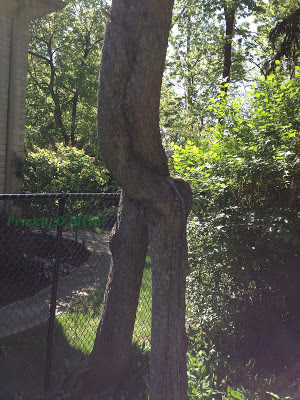 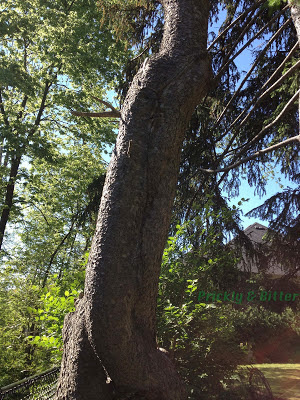 The reason why I have no idea what species of spruce these photos represent is because I didn't care to be honest. The trunk characteristics of this tree are far too interesting to care which species it is :) It's either a red, white or black spruce. Black seems unusual due to the height and the general shape of the tree, but white spruces usually have much larger cones than this one has. Red spruce has very different bark...

If you would like to know more about a bunch of different species of spruce, you can learn about the Norway spruce HERE, the Colorado blue spruce HERE, and the black spruce HERE.

So what's so exciting about this tree? This tree has managed to graft itself, then lose one of the scions (the portion of the plant above the grafted location) so that it looks like an upsidedown-Y tree. Normally grafted trees are no big deal. In fact, there are so many grafted trees sold in nurseries unless you really knew what you were looking for you would never notice the difference. A lot of fruit trees, especially those in the rose family (like apples, pears, plums, cherries, peaches, etc.) are grafted because their root stock isn't very hardy. Since the top of the tree essentially "dies" during the winter then is miraculously "revived" in the spring, obviously some part of the tree stays active all winter in order to perform basic maintenance on the above-ground tissues. That's actually the main reason why cryogenically preserving humans can't work yet: when you freeze our bodies, we actually...freeze. Ice forms in our cells, rupturing the membranes. Because our tissues are frozen solid you don't notice. But as soon as the body starts to thaw, the frozen tissue turns to mush and ends up going necrotic (turning black). Bananas do the same thing; that's why a thawed banana isn't a pretty banana! But great for making banana cream pie...but I digress.

Back to roots. Roots stay alive all winter, and the microbial symbioses between tree roots and the microorganisms that live in the soil can actually generate enough heat to melt permafrost in the arctic! That's an impressive amount of heat. The problem is getting the right amount of these symbioses to maintain a ground temperature above freezing so you can heat the rest of the tree by flowing warm water through the vascular system to prevent the tree from freezing solid. Some trees are better at this than others, hence why some trees are winter-tolerant while others are killed when the ground starts to freeze. Members in the rose family have their roots frozen quite easily, so how can we have apple orchards in Ontario? The ground freezes here every winter. The secret is in the grafting process. The scion of the graft is the apple part, while the rootstock is the tolerant of freezing part. The most common trees to use for rootstocks are also "water scavengers" during times of drought; if you've ever had a willow tree in your back yard and have been unfortunate enough to have a sewer running anywhere in the vicinity, you might be aware of what I mean by a "water scavenger". Willow trees are notorious for their ability to break through concrete and colonize sewers with roots in order to absorb more water. What better way to find a water source (unless you're a homeowner...)?! If you want a nice apple orchard that produces juicy apples, putting your apple scions on willow rootstocks seems like a no-brainer and that is how we "make" apple trees. We don't grow them from seeds at all!

So what does this have to do with these spruce trees? Well, usually when you do a graft you start with one scion and one rootstock and you get one plant. If you start with two scions and two rootstocks you get two plants. Three of each? Three plants. These trees, however, fused together then one of the scions was sacrificed, probably by the other one being too "greedy" and taking too many resources during a time of stress. The scion died but the rootstock remained. It should be no surprise that this tree is significantly taller than its neighbours; it has two sets of roots feeding the crown (the top) of the tree! If that's not cool, I don't know what is.
Posted by Jen M at 4:38 PM