A monster looms in the bluebells... 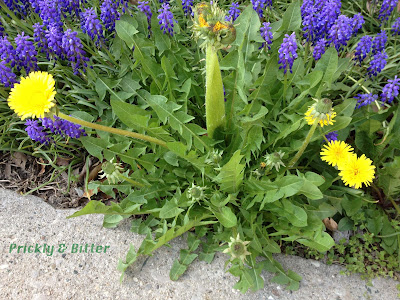 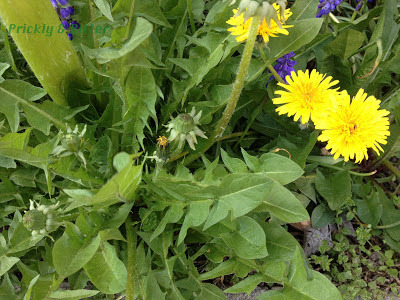 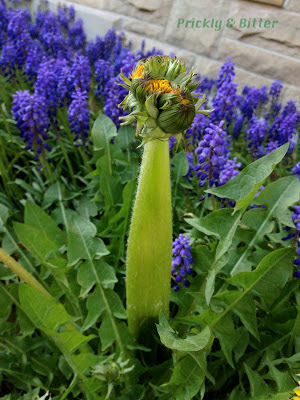 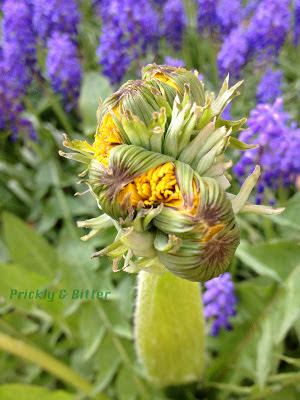 Feeling like you have deja vu? That might be because I've already blogged about dandelions before, but they were regular ordinary dandelions. This one is special! If you'd like to read my last blog about dandelions and learn a whole bunch of cool stuff about dandelions in general, you can do so HERE.

Dandelions are most likely native to Eurasia, but there's a significant debate about their origins. There have even been a few people to suggest that the true dandelion that carries this species name is only found in North America, and that there's a separate species in Europe. The Europeans always feel they have to be special... :) Regardless of the true species name, almost all dandelions are created equal: they flower in the spring when you're just trying to get your grass looking good again, most people hate them, they have taproots that are nearly impossible to get out of the ground unless you're weeding after a heavy downpour and the ground is wet (if you've never weeded after it has rained, give it a try. You'll thank me later. You're welcome), they have bright yellow flowers that turn into fluffy seed heads, and no matter what kind of biological warfare you use on them the always come back. You know, typical boring (some might say ugly, but I rather like them) dandelions.

Instead of just talking about why dandelions are cool, I wanted to talk about why THIS dandelion is cool. You can see right away from the top image, highlighted in the bottom two images, that the flower head of this particular plant doesn't look like a typical dandelion plant. This phenomenon is called "fasciation", and so this dandelion plant is fasciated. This means that all of the flower heads that would have developed into their own flower under normal conditions have, for some reason, fused together and created a mutant giant flower head (caused by the fusion of many separate meristems at the end of the inflorescence stalks). This, to me, is one of the most fascinating phenomena of the plant world, and has been documented in over 100 species of plants. The best part? No one has any idea why this happens in any given plant. There are lots of ideas of why this might happen in general: exposure to radiation, attack of a virus, exposure to low doses of specific chemicals (like 2,4-D, or Roundup, for example), mechanical disturbance, insect damage, or genetic mutations. But could anyone tell you why THIS PLANT became fasciated? As of our current knowledge, no. You could definitely speculate and come up with the most likely scenario but you would never be 100% sure (and there are likely other reasons why this happens that are currently undocumented). Normally this phenomenon is incredibly rare in the plant world, and to see it would be a real treat...except dandelions. Apparently dandelions do this all the time! Silly plants. The speculation here is that in this plant species it is more than likely pre-determined by genetic mutations that can be passed on through the seeds, but also exposure to common pesticides like 2,4-D also play a role (and dandelions are always on the end of chemical attacks, it seems!). Unfortunately, someone ripped this plant out of the ground (and by someone, I mean the people that do grounds maintenance on campus) before it had a chance to finish flowering and turn to seed. I would have loved to continue taking pictures of the flower development and collect some seeds to see if I could grow a new fasciated dandelion! Yes, I know what's coming. "You know you're a nerd when..." :) Don't worry, Mom and Dad. I would have done it in the greenhouses at school!

Have you ever seen a fasciated plant? Now that I know it exists, I saw the remains of a fasciated tulip growing in a bed on campus. Fascinating fasciation!

EDIT: I guess I should mention that this phenomenon isn't just restricted to the plant world; it also happens in fungi. Next time you're in the grocery store and have some time to kill, go pick through the bin of shiitake mushrooms. I bet you'll find a mushroom with a single squashed-looking stalk with two caps on the top. Fasciated shiitakes are quite common; I guess that makes the shiitake the dandelion of the fungus world!
Posted by Jen M at 12:33 PM